05.28.2022 | 1:23 AM | LA PALMA – A rollover crash downed a power pole leaving over a thousand customers without electricity, early Saturday morning.

The incident was reported as a structure fire near the intersection of Walker Street and Houston Avenue around 1:23 AM.

But when authorities arrived they discovered crash involving a red 2015 Honda Accord that had landed on its roof after shearing a fire hydrant and colliding with a power pole that collapsed into the backyard of a home.

No occupants from the vehicle were located but the impact of the crash sent the power pole into the backyard of a home causing a power outage that initially impacted 1,299 customers.

Police are investigating the circumstances surrounding the crash and working to locate the driver of the vehicle who apparently fled.

No injuries from the rollover crash were reported.

Southern California Edison estimated that most power in the area would be restored by 5:00 AM. 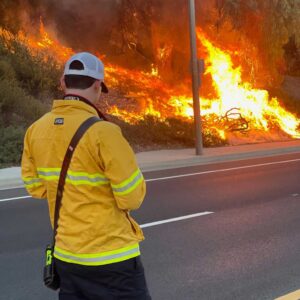